2022 Legacy Award Recipients - for our 50th year, we will be awarding 5 Legacy awards!

Dan Groeneveld was awarded the Legacy Award for his hard work hosting events, judging and supporting AWA and other boards. 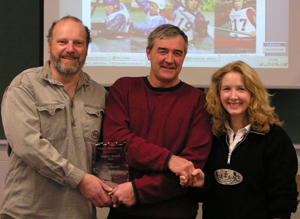 The 2008 Legacy Award being presented to Gord and Rena Murrie by Greg Hunter.

The 2007 Legacy Award is awarded to Bruce Waldie for the contribution he has made to improving the level and competence of Judges and other Officials in the sport of Whitewater Slalom. Bruce has given countless clinics to those interested in raising their level of awareness of the rules and their expertise in applying them.

"As parents/volunteers, my wife Diane and I got involved early on in our son's paddling career as judges", says Waldie. "However, until Nationals in Chilliwack in the early 2000's, we never had a clear understanding of many of the rules. The organizers that year did a good job of trying to educate officials and for the most part, it worked. However, several very poor calls and decisions were made that year and I complained about them."

"That led to the inevitable retort 'well if you think you can do a better job...', so I decided that I could."

Bruce started studying the rules and even found some inconsistencies that he raised with the International Canoe Federation (ICF). He then began giving judging clinics with the first one on May 9, 2004 at Canoe Meadows. "The weather was awful, it was cold and we had wet snow.
Several people had tents collapse on them overnight. I had to give the clinic inside the AWA tent, but it went well. We had to suspend the practice race twice. We could not see the gates on the far side of the river because of the falling snow!"

Bruce has been able to provide high quality training to over 75 people since then, with many of them coming back for refresher courses. He has been Chief Judge and Chief Official at two National Championships and continues to offer his advice and services whenever he can.

Bruce obtained his IJSL designation (International Judge SLalom) in Prague, Czech Republic in the summer of 2006 after writing a 3 part exam and being a shadow judge at the World Championships. He has now been selected to be one of less than 50 people in the world that will have a new designation of ICF-JSL. He will travel to Beijing China in August 2007 for the Pre-Olympics Test Event, then to Foz do Iguazzu Brazil for the World Championships, and again to Beijing for the Olympics in 2008.

Bruce has been a long time contributor and executive member of the Cottonwood Kayak Club and the Alberta Whitewater Association. He has also been a volunteer referee for Canoe Polo.

Bruce has a motto for all club activities: "none of us could do this without all of us."

Congratulations on this award, Bruce.

The 2006 Legacy Award is awarded to the teams of Barry and Brenda Allen, and Laurie and Marian Curson for the contributions they have made to club development in Alberta. Starting in 1988 they formed the Cottonwood Kayak Club (CKC) as a result of strong interest in their area for paddling activities. With a Sport Development Grant they purchased 4 plastic recreational kayaks which were used by adults and juniors to develop kayaking skills.

By 1991, CKC was fielding a junior team in the Alberta Summer Games which did very well. They added 4 Wildwater kayaks to broaden their experience level. The team was awarded an Outstanding Team award by the town of Innisfail.

In 1992 they built a permanent flatwater course for Slalom training, with costs covered through club fundraising. They started a second Junior (development) team. The senior juniors started coaching and helping out the younger athletes. Throughout this all, the Allens and the Cursons continued to coach and organize activities. CKC expanded to winter training sessions at the Innisfail Aquatic Centre.

By 1993 CKC had added Adult and Play Paddle sessions for anyone in the community that was interested. The Competitive Junior team did well again at the Wetaskiwin Alberta Summer Games. This raised awareness of the sport locally through newspaper articles and word of mouth.

After 1993, a trend became apparent. More and more experienced paddlers were coming back to help coach the new paddlers. Parents were becoming involved both as volunteers (judges, fund raisers, etc), and as recreational paddlers. CKC became more than a club, it became a community.

CKC, under the directorship of the Allens and the Cursons, became a club that could become a role model for other clubs in Alberta and even in Canada. With values like community, top down contributions by experienced paddlers, involvement of families in all parts of paddling, fund raising, and so on, who could go wrong?

Even though the Allens have moved to Airdrie and the Cursons are sailing around the world (literally) CKC continues to thrive with the involvement of a new executive that rose from the ranks of involved parents.

CKC has produced a significant number of athletes who have competed at Provincial, National, and International levels. At least 3 of their alumni have been counted in the top 20 in the world. This all happened because of the top down club structure that the Allens and the Cursons fostered.

Thank you Barry, Brenda, Laurie, and Marian. Congratulations on receiving the 2006 Legacy Award!

The 2005 Legacy Award was presented to Greg Hunter at the 2005 Nationals Banquet by Gord and Rena Murrie.

The AWA Legacy award was presented to Chuck Lee, Pinch-O-Crow Creekers, at the AWA Annual General Meeting - Jan. 24, 2004, held in Cochrane, AB. This is the first time the AWA Legacy Award has been presented. The inscription reads "With appreciation for all your years of commitment, leadership and promotion of kayaking in Alberta". The Alberta Whitewater Association is proud to present this award to Chuck. 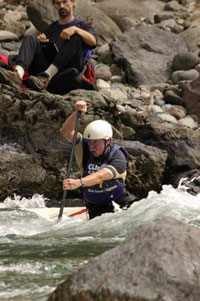